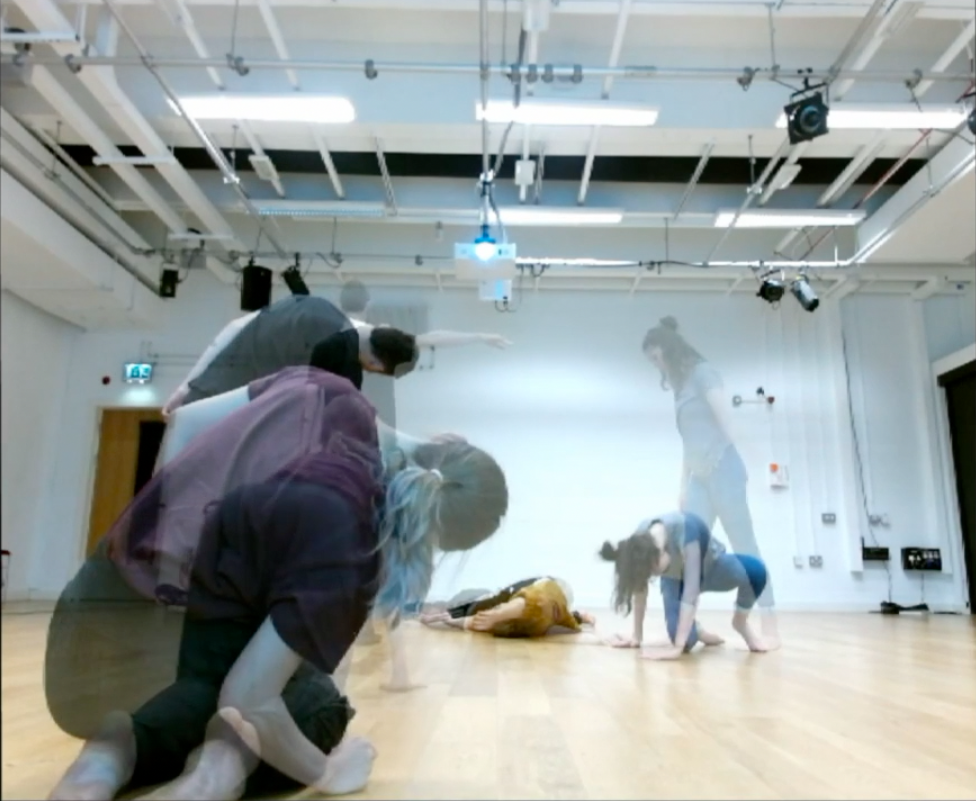 This research project started as an exploration into the unknown regarding the impact ubiquitous technologies, interaction design and computational creativity could have on performing arts’ development and teaching. The idea of ‘not knowing’ as key to creating ‘new ways of knowing or thinking’ has conditioned my encounter with and investigation of technology as a choreographic tool (or collaborator or agent). Drawing on André Lepecki’s conception of process dramaturgy in dance as ‘a ceaseless and methodic exercise of destroying the figure of the one who is supposed to know’ and being about ‘err[ing] as to drift, to get lost, to lead astray’ it underpins the dramaturgical role that I envisage for technology within dance creation processes (Lepecki 2015).

My research investigates the concept of digital dramaturgs, a term I have coined for digital interactive environments that act as both default breakers and creative catalysts, intervening in improvisation-based dance creation to stimulate movement discovery and new choreographic decision-making as the work evolves. Initially about augmenting choreographic agency in community dance participants, it has shifted to an investigation into how digital dramaturgy catalyses the discovery of the agency of the choreography itself. The choreographic thinking becomes not just something subjugated to or born of human (or a choreographer’s) agency but something that the technology can intervene in, causing unexpected forms to emerge within the improvisation, and through this, new understanding of our moving bodies and our identities as dancers to grow from within the unfolding work.

At the core of my research lies Tools that Propel, an interactive video installation developed in collaboration with fellow 3D3 researcher Adam Russell. Confronting its subjects with a life-size projection of themselves and other bodies, it blends live ‘mirror-like’ video and recorded fragments from the recent past that resemble their current movement. The dancer improvises with ‘ghosts’ of themselves and others tracked by the sensor before them; the entanglement encourages breaking of habits and mining of memories, exploring subtle variations. The logic of Tools that Propel grew through and across disciplinary terrains as we navigated ‘without a compass […] so that together we [could] build that which we [did] not know what might be’ (Lepecki 2015). Mirroring this, when using Tools that Propel, dancers are propelled to new physical discoveries and embodied understanding as it draws on the decisions and movements of their corporeal selves but disturbs them, feeding back the incidental and gestures which start midway through the trajectory they previously knew. As part of my research I will use Tools that Propel to create a series of movement portraits with people from a wide range of dance experience – from untrained community participants to professional dancers/choreographers; as a dramaturgical presence on stage; and as a teaching tool.